Walk into Ealing Hospital and you could be forgiven for thinking you were in a foreign land. Looking around the maternity unit, the vast majority of mothers with newborns are from abroad. […]

One woman who recently gave birth at the hospital told me: ‘I was practically the only British woman there. Some of the others didn’t speak a word of English.’

Hardly surprising, given that last week new figures revealed that 80 per cent of the children born at the West London hospital over the previous year were to foreign nationals.

A Daily Mail investigation reveals that births to mothers born outside the UK last year rose to the highest figure since records began in 1969.

‘The services were overstretched, with the midwives struggling every day. I monitored the progress of a bloodstained nightgown over the course of five days, hanging forlornly over a shower rail.

‘The cleaners ignored it. The staff never bothered to look. In the end, I donned a pair of surgical gloves and took it to the ward’s dirty linen basket.

‘The post-natal care was dreadful — once you were out of physical danger, the staff didn’t want to know, they had to put all their resources in at the sharp end.

‘The majority of women were not white Caucasian because Ealing hospital is the nearest NHS hospital to Southall, which has a large Asian community, and Ealing is also home to many Poles. You could see the strain of coping with such a diverse population — the curry menu at the hospital was fantastic, far better than the English food on offer.’

Staff clearly encountered difficulties with some patients’ cultural norms. Beezy witnessed a Somali man insist his wife — who had already had two children by Caesarean section — should go home to have a ‘natural’ birth because it was ‘woman’s work’.

‘Doctors begged him not to take her home, explaining that they needed to perform a Caesarean, because her womb was at risk of rupture if she went into labour naturally. They left anyway. It was horrendous.’ 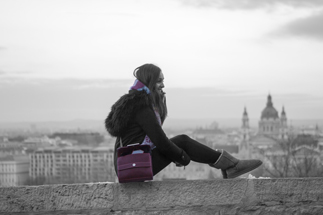